You never know when inspiration will strike, but it’s important to be ready and take advantage when it does. Luckily, Tom Reiter, owner of Reiter Outdoor Products, was ready when his light bulb went off with a new concept in ice fishing. “In 2014, I had this idea and thought, ‘why couldn’t there be a device that you set your rod and reel in with the bail open and it trips a flag once a fish strikes,’ and from there I started tinkering with different ideas and building prototypes.” With each new design, he would test the tension needed in order for fish to trigger the flag, how the wind affected the set-up, and how the trigger design worked. “It took three or four designs before I came up with this trigger design and it took off from there.” 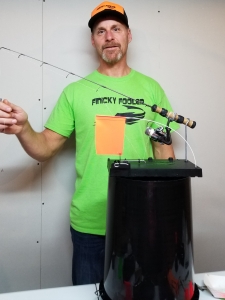 Tom Reiter with his Finicky Fooler

After testing his prototype that winter, Tom discovered it worked well. The Finicky Fooler was ready to introduce to the outside world. He showed it to friends while they were fishing and they all proclaimed the same thing. “Hey, this thing works good. You’ve got to get a patent on this thing.” At that point, Reiter knew he had something that people would want. “From there we designed a little better prototype and made up over 500 of those,” Reiter explained.

As many business owners know, having a good idea and getting people to buy your products are two different things. Tom began the challenge of getting other people to recognize and sell his product. “The hardest thing was trying to get it into shops. Some showed interest, while others showed no interest. I decided just to deal with the ones that had interest, and not try to force the issue with the ones that didn’t. A lot would say it was a cool concept, but didn’t want to buy them,” Reiter said. He figured if he could get some local shops to commit and then make the rounds at ice fishing and sports shows, then pretty soon the word would spread. It turns out his hunch was correct. “That following winter, we got into a few shops and sold 400 of them.”

“After selling those, we figured we needed a design that would be more efficient to assemble,” Reiter acknowledged, explaining how his family helps with the assembly and his daughter Miranda runs their website and Facebook page. “It was simply too time consuming.” From there, he came up with a new design, this time with a plastic base. Reiter also began looking for local manufacturers to help build components and ultimately expand his production and grow his company. Reiter worked with Deluxe Plastics in Clintonville on the new design that would incorporate the hardware from the prototype into a plastic base. A 3-D print was made to test the design and then a mold was made. Reiter liked what they created and had them produce 3,000 plastic bases last year. G3 Industries makes the trigger arms and the rod holders just down the road in Kronenwetter, the flag material is ordered from a company in Ohio, and the fiberglass flag staff comes from a company in Alabama. “Once we get everything, we still need to put them together, but it works well. My brother cuts the flags to width with equipment at his business in Appleton then I cut the flags to length with a paper cutter. I glue all the flags myself, and my family helps with the assembly. It’s nice working with G3 Industries because they are just down the road too, so if they have any questions or need to make changes I can just stop by. Even Deluxe Plastics isn’t that far away if I want to stop by. It’s definitely a family operation.”

Tom also owns a self storage facility in Kronenwetter which offers flexibility to focus on the Finicky Fooler and taking Reiter Outdoor Products to the next level. On their website, customers can buy the Finicky Fooler Tip-Up, but Tom has already found a need for another product, a hole cover, which was recently just added to their website, and he’s hoping his product line continues to grow from there. “The biggest thing with the hole cover was the prototype of the ring idea. It works well because it keeps the hole air tight and prevents the hole from freezing up. Prototypes were tested last season with encouraging results and we have already done a little testing on the new product during that cold snap earlier this winter and are ready for more testing soon now that it’s getting cold again,” Reiter explained.

“It has its ups and downs and is a bit of a roller coaster ride, but we’ve had nothing but good feedback and several repeat customers. It’s nice hearing that people like the product and the word is spreading. That’s the best part of what we’re doing,” Reiter described, when discussing where the company is headed next. “At the trade show we were just at a purchasing manager from Scheels liked our product and the Finicky Fooler may be in their store soon. We’re slowly but surely increasing our market. We got a bait shop in North Dakota that is going to order, and we’re possibly adding more product line. We’ll see where it goes from here. One product sparks another and pretty soon you have a product line. We’re making progress and moving up in the world.”

First Published in On The Business News on January 1, 2018.